I asked some of my favourite Vancouver bloggers as well as bloggers from around the world to contribute their most coveted shoe for the fall season. I told them money was no object and they could choose anything. Of course, I had to put myself in the mix (it is my blog after all). Note that there is a hefty Vancouver representation (I suppose Tavi was too busy planning all her events for NYFW). The ten bloggers on this list all have an incredible sense of personal style and vast knowledge of fashion.

The result was even better than expected! I’m thrilled that no one picked a flat, because let’s get real: no woman’s dream shoe will ever be a flat! There is a healthy mix of sculptural and classic, of practical and not-so practical. It’s no surprise that the late Alexander McQueen’s angel wing shoes are making an appearance, twice. Some of the most experimental shoes this year came from designer collaborations: Nicholas Kirkwood for Rodarte and Pierre Hardy for Balenciaga. Both re-evaluate the idea of what a shoe can be. No fall season is complete without a sturdy wedge bootie, and here we have two by those who do it best, Finsk and Acne. Winter wouldn’t be winter without Burberry’s cozy shearling, nicknamed “straitjacket” boots. And, of course, classic silhouettes never go out of style, especially when in combination with luxurious snake skin and napa leather. Who better to trust with the classics than Christian Louboutin and a shoe newcomer, Aperlaï (this label will be huge, trust me)? Enjoy! 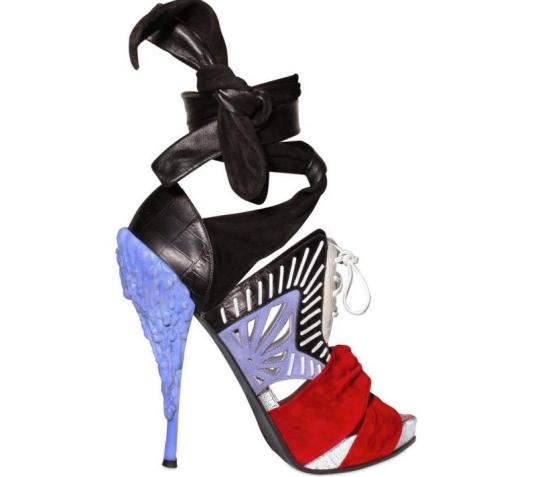 (available by special request from studio@nicholaskirkwood.com)
“Because who would have thought a glow in the dark melted wax heel would even be possible? How did Kirkwood gather up so many semblance of things and shove them into one shoe design….” 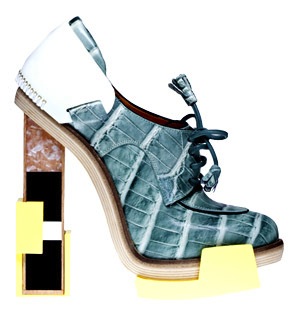 (available by special request from Balenciaga)
“Okay, you said ‘money is no object,’ but I’m not sure if you meant that feasibility isn’t an issue either because I don’t think these are available for sale, ha ha. But if I could have any shoe right now, it would be these. Mehhh… shoe torture.” 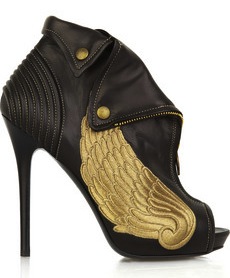 ($1,285 US at Net-a-Porter)
“Ankle boots are my bread and butter — I could wear them everyday and with every outfit. Throw in a gold embellishment and a moto jacket inspiration and I’m in love. McQueen always knows the way to my heart is through my feet!”
Sabine of Haute World (Paris, France): Alexander McQueen Wing-Embroidered Platform Sandal 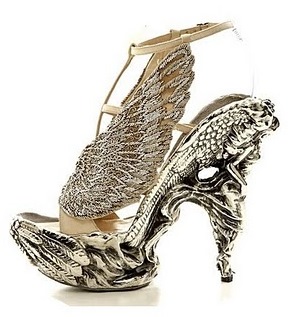 (available by special request from Alexander McQueen)
“Well, my ultimate dream shoe would have to be something from Alexander McQueen’s final F/W10 collection. Not just because he was my favorite designer and this was the last collection he (partially) worked on, but because, as always, the fashion house has managed to create the ultimate statement shoe. I love the baroque vibe, the elaborate sole and statue heel and the fact that even if you’re too scared to take it out for a walk, it still makes for great art on your mantle piece. Opulence at its best!” 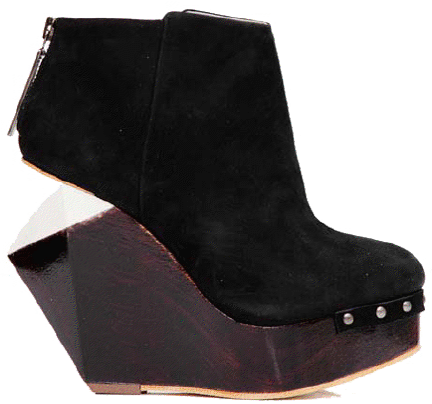 (£350 at Finsk)
“I’m a big fan of the simple and futuristic look of these shoes. I love the contrast between the suede and the wooden platform wedge. Although it is hard to see on a white background, the white on the back of heel adds a pop of colour when viewed from behind. And as a bonus, they are wedges and thus they are bound to be a little nicer to my flat feet!” 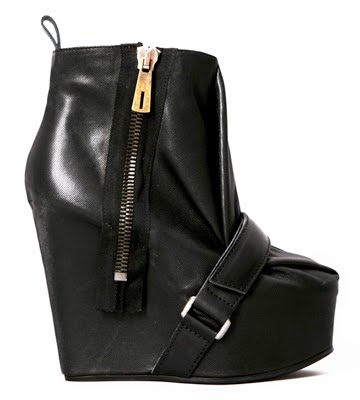 ($680 US at Acne)
“When I was asked to pick any shoe at any price as my most wanted shoe for fall, well, it was easy. I have been a big fan of Acne for awhile, but when I saw these I actually wished that I had all the money in the world. I don’t really know how much they are, and I am afraid to look. Anyways, you’re probably surprised that I didn’t pick something that sparkles or that is a little girly – there’s a reason for that. I love shoes that I can imagine wearing all of the time, anywhere. I don’t have a car, I walk everywhere and Seattle hills can be difficult in heels. So these Acne wedges in their buckled glory will be great for every day – dresses and hills!”
Erika Marie of Fashion Chalet (Miami, FL): Burberry Prorsum “Aviator” Buckle Ankle Boots 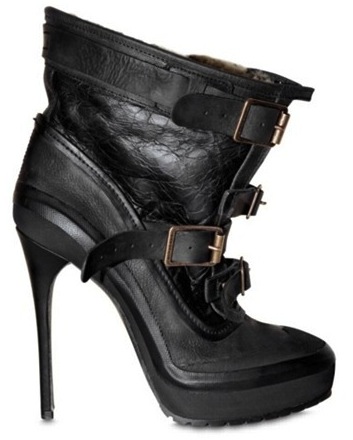 “It’s the best melding between menswear tough and elegance I have ever seen.” 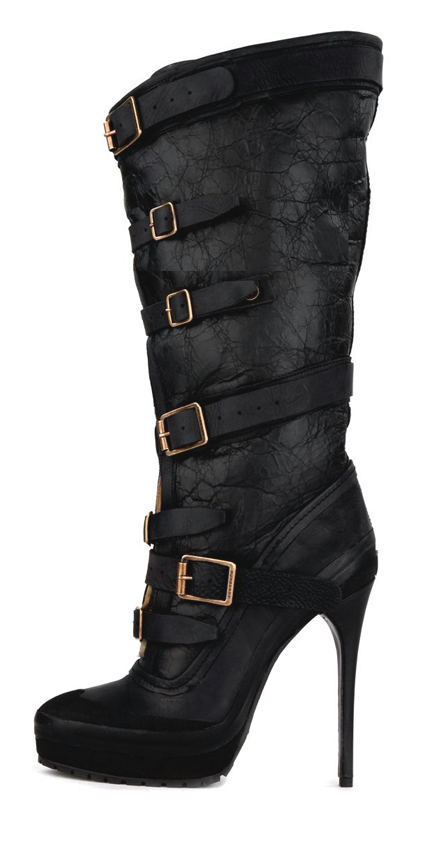 ($1395 US at Burberry)
“My #1 coveted shoe for fall is Burberry Prorsum’s “Straitjacket” buckle boots. I love the shear-lining and heavy buckles. My initial reaction when I first saw them was that I had to have them. They’re absolutely perfect for fall, as well as for stomping around in the snow during winter.”

(She ended up getting the ankle ones. Lucky girl!)

Anya of I’m the It Girl (Vancouver, BC): Aperlaï Lace-up Snakeskin Platforms 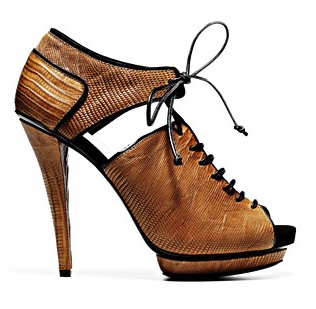 (can’t find these anywhere – Aperlaï doesn’t have a website)

“I was going to pick Balenciaga too, but these come very close second. Balenciaga’s inspiration was Mondrian, but Aperlaï hides a subtle influence of curvy forms by architect Oscar Niemeyer. The composition of this shoe is pure heaven. Plus, who can resist three different textures of sexy snake skin and a five and a half inch platform heel?” 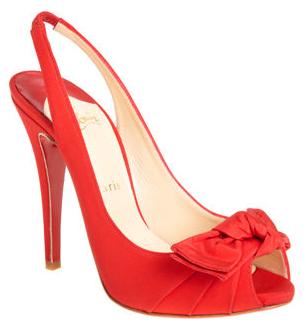 ($730 US at Barneys)
“My most coveted shoe of the season? It’s not a rugged cut-out military boot, or a pony-haired leopard-print pump (though I do love them both). The shoe that caught my eye is the classic peep toe Lady Bow from Christian Louboutin. It’s not trendy, it’s timeless. And I love that about it.”


“And then there’s that red, the colour of the prettiest lipsticks. Just. So. Ladylike. How on earth I’d be able to walk in that sky-high Louboutin heel, I don’t know. But let’s face it, this exercise isn’t really about practicality, is it?”

Inspiring, aren’t they? What are your most-coveted shoes?