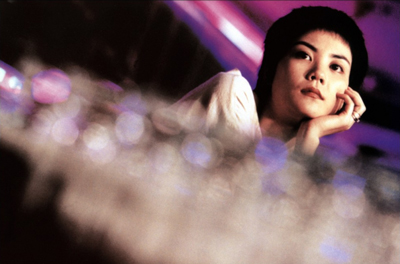 As a somewhat angsty teen, I was an enormous Quentin Tarantino fan. (Seriously though, if you weren’t one in the mid-90s, you were probably: a) blind; b) deaf; c) both.) Not only did he give us clever one-liners from Pulp Fiction to recite over and over in the school cafeteria, but he also introduced Wong Kar-wai to American and, in my case, European audiences. Two years after its original release in Hong Kong, Chungking Express was re-released through Quentin Tarantino’s distribution company, and backed by Miramax. Needless to say, the film made Hong Kong seem like the coolest place in the world, at least for a short period of time before the handover in 1997. 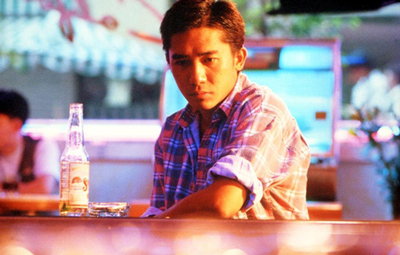 Shot in only 23 days, with an annoyingly repetitive but endearing soundtrack comprising mostly of “California Dreamin'” by The Mamas & the Papas, Chungking Express is captivatingly dated — as most of my favourite films are. Its electric surrealist palette capture the city’s dreamlike state, a stage for two very lovesick cops, an eccentric young woman, and a mysterious blonde-wigged femme fatale. 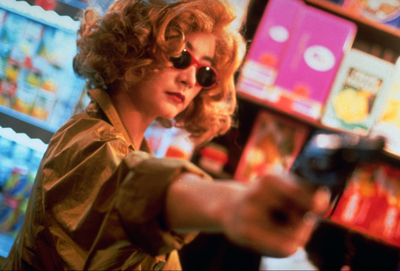 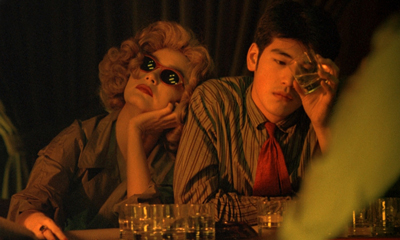 Cinematographer Christopher Doyle captures the hustle and bustle of the metropolis, with both anxiety and stillness. The film marks the first time Wong Kar-wei’s trusty art director, William Chang, acted as a costume designer. (Chang was also responsible for the breathtaking In the Mood for Love.)
The narrative of Chungking Express comprises two separate but loosely interconnected stories. The darker of the two follows Cop 223 (Takeshi Kaneshiro) as he deals with a recent breakup. Looking for a new romance, he is drawn to a blonde (Brigitte Lin), who turns out to be involved in gang activity. Lin’s character, dressed in a raincoat, a blonde wig, and red shades, is Wong’s tribute to Gena Rowlands’s tough gal in John Cassavetes’s Gloria. 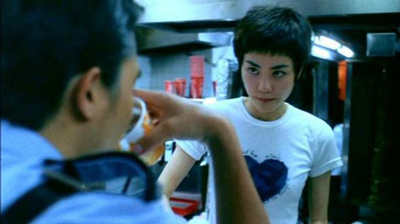 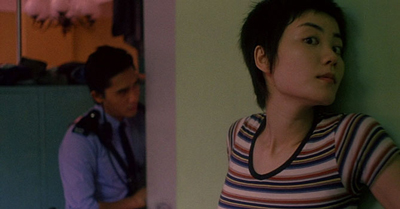 The second storyline follows the ridiculously handsome Cop 663 (Tony Leung), who is also recovering from a recent bout of heartbreak. He meets the adorable Faye (Faye Wong), a waitress at the Midnight Express, a eatery both charming cops frequent. The opposite of the femme fatale, Faye is a quintessential ’90s quirky girl, with a sweet pixie haircut and a slew of delightful t-shirts and floral blouses depicting her innocent nature — even her sinister side, like when she breaks into Leung’s apartment and frolics on his bed, is adorable. 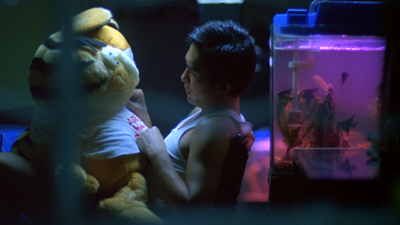 Unlike others, Chungking Express in the breeziest of Wong’s films: optimistic, and sexy in that romantic, faultless way. Through its hopeful narrative, it also gives us a glimpse of a city that could have been under different circumstances. Also, it captures a rare chance of seeing Tony Leung in bed with, not one, but two giant stuffed animals — and, for that alone, it’s worth seeing at least five times.
Further reading:
“Chungking Express: Electric Youth” by Amy Taubin, criterion.com

PS. Read my Screen Style feature on In the Mood for Love.