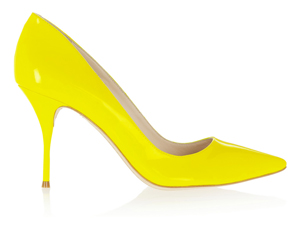 It’s been a long time since I posted a classic pump. Even though it’s probably my favourite (and everyone else’s) shape of all time, talking about a pointy pump over and over gets boring pretty fast. Yes, it goes with everything, blah blah blah.
I did want to bring attention to Sophia Webster, a rising star in footwear. Surprise, surprise: she is British, as many of-the-moment shoe designers are. In her first season and already on Net-a-Porter, at Neiman Marcus, and at The Room, Sophia Webster made a pretty impressive debut. It’s to be expected from Nicholas Kirkwood’s former design assistant — as you know, he’s a long time blog favourite. 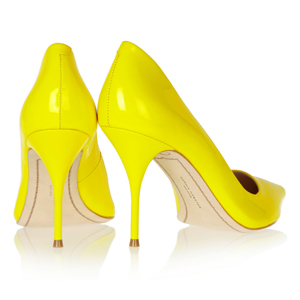 But back to the pump. Webster’s pumps are about half the price of her mentor’s, and that middle price point has been hard to find. With most designer pumps reaching over $500+ mark, one is usually left only with fast fashion options. Now, there’s Sophia Webster.
$320 at Net-a-Porter (more colours available).