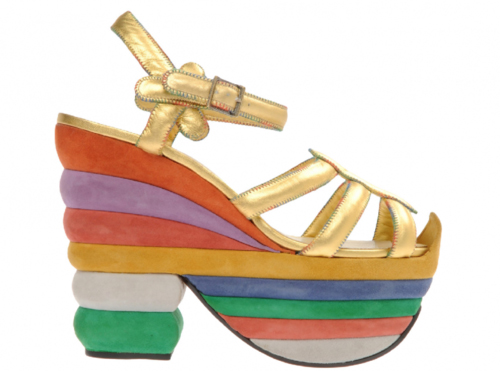 I’m pretty sure these are the greatest shoes ever designed. It’s not because they are the most beautiful — let’s face it: they look kind silly, but in a good way — but because they were kind of “game changers.” Salvatore Ferragamo designed these in 1938 for legendary diva Judy Garland, except that she wasn’t a diva yet, but the young star of Wizard of Oz (the shoe is named after “Over the Rainbow”). 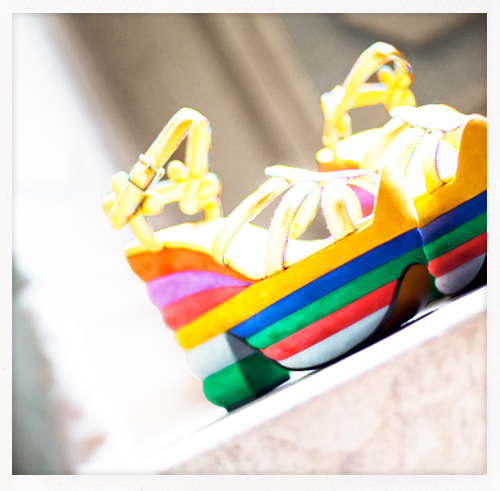 photo by Garance Doré
I’ve looked at this shoe in various design books before, failing to notice that the date of creation was 1938. I mean, I knew this was Ferragamo’s most famous shoe, but I always thought it was designed in the 1970s. That chunky rainbow platform is so ahead of its time, and it’s remarkable how much so (most 1930s women’s shoes looked like these examples).
Last week I had a chance to purchase the limited edition re-issues of the Rainbows. They are available here at the Ferragamo flagship in Vancouver, along with other Ferragamo’s Creations designed for Marilyn Monroe and Audrey Hepburn (I wrote about the collection and the exhibit for FLARE.com). In person, Rainbows did not disappoint: they are plush, luxurious, and sky-high (just the way I like them). But — oh, sigh — to make them mine would’ve cost $2500.
So unfair.