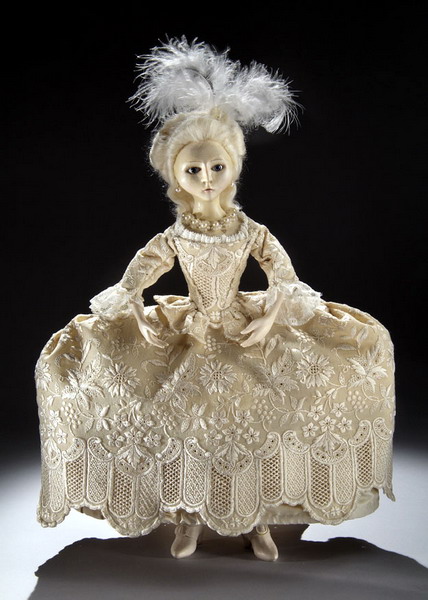 French Pandora (1750)
In my recent readings, I came across a sweet little piece of fashion history: the Pandora. Before fashion magazines and runway presentations, a Pandora was the only mannequin used to relay the latest in vogue. During the 18th century, these little 12″ dolls jet-setted around Europe, showing off their respective outfits of origin. For example, when Marie Antoinette was still Maria Antonia, the pre-teen Archduchess of Austria, and was in training to become the Dauphine of France, the French court would send her mother Pandoras wearing the court fashions of the moment, and her mother would then have them replicated for her young daughter. 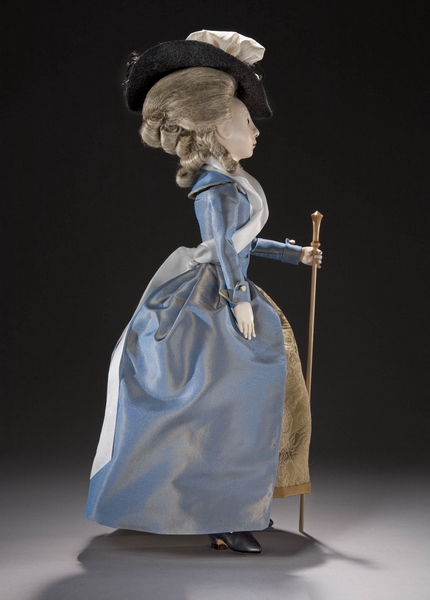 French Pandora (1785)
Other than for the purposes of young Marie Antoinette, the Austrian court didn’t care much for fashion. Pandoras (also known as “poupées de la Rue de Saint-Honore”) mostly travelled between Paris and London, where the British Royal family patiently waited to see what the French dressmakers concocted. This was especially so during Marie Antoinette’s reign, when her dressmaker Rose Bertin was creating the most exuberant fashion to ever walk this earth. Usually two dolls were sent: a “big Pandora” dressed in evening wear, and a “little Pandora” dressed in daytime garb. 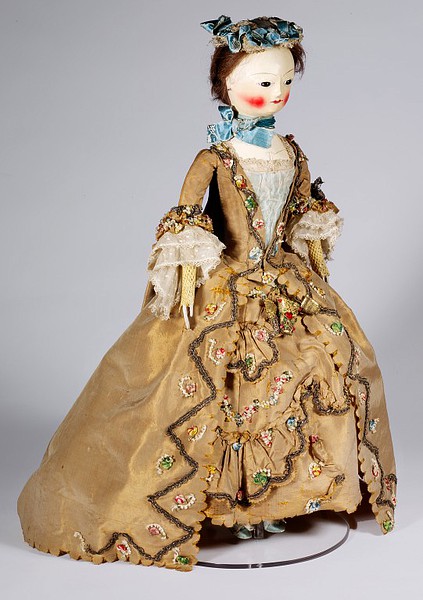 English Pandora (1755-1760)
Once the dolls’ clothing was copied by court dressmakers, the Pandoras would make their way to the window displays of posh dressmakers and, once they were on their way out of being in vogue, they would be sent to New York (the poor New Yorkers were always a season behind!).
But the craziest thing is that people were so crazy about fashion, that, even in times of war, the poupées enjoyed diplomatic immunity, and were often given cavalry escorts to ensure their safe arrival. Now that’s travelling in style.
Images courtesy of Victoria and Albert Museum (English Pandora) and passionatescribbles.blogspot.ca (French Pandoras).