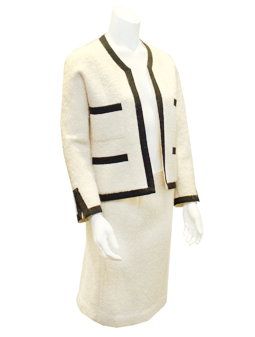 While browsing through vintagecouture.com (honestly, it’s the best place to procrastinate), I stumbled across a vintage cream Chanel Couture suit (once owned by Kitty D’Alessio) with black piping, the kind I’ve been dreaming of since… the dawn of man. A Chanel suit is pretty much the only style of dress that has gone unchanged for almost 100 years. The suit turns 100 next year, with its origin dating back to 1913 when Coco Chanel wore it for the first time. In her own words, it was “a fashion statement of the century.” And it truly is. 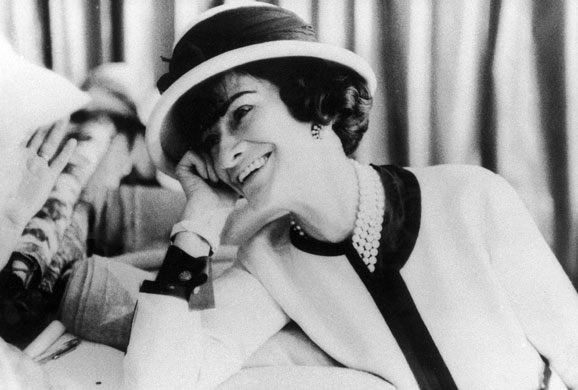 Coco in her cream suit
It was constructed according to precise rules decided by Chanel. It was cut to allow ease of movement, its sleeves had to be fitted precisely at shoulder level, it had to have pockets and trim, the top and bottom had to be cut from the same fabric to avoid any colour variations, and each jacket was to have a chain sewn into the hem to allow the fabric to hang perfectly (it’s all in the details). These rules are still closely followed by Karl Lagerfeld, who has always respected the original design. 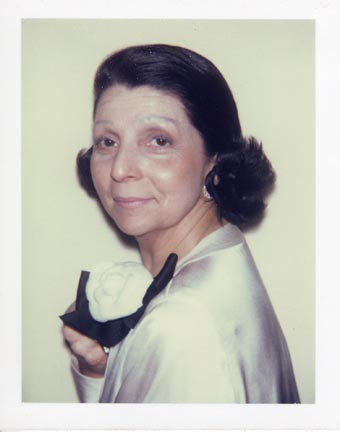 Kitty D’Alessio by Andy Warhol (1984)
This particular one is not only the dream suit, but it also happens to be from a couture collection, making it the suit. And it used to belong to Kitty D’Alessio. “Who?” you ask. Well, she was at one time the president of Chanel and a dear friend of Coco herself (and maybe even an inspiration for the character of Peggy on Mad Men, having been the most successful female advertising executive in the 1960s). She was responsible for bringing Karl Lagerfeld to the house, stealing him away from Chloe, only to be grossly betrayed by the designer for enlisting Inès de la Fressange, whom Lagerfeld had a falling out with, as the face of the label. As an explanation for her leave, Lagerfeld said, “The good news is that Kitty D’Alessio has been made ‘Director of Creative Projects.’ The bad news is that there are no Creative Projects.” Maybe she wore this suit when it happened? Think about that.
$4,500 at vintagecouture.com.
PS. I do have a cream “Chanel” jacket by Milly that will do in the meantime.