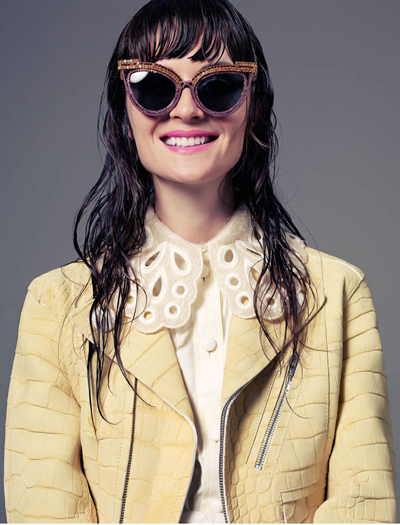 Anouck Lepere by Steven Pan (Interview Russia, March 2012)
A few years ago, I would have totally dismissed this colour for two reasons: 1) I would cringe at its 80s-ness; and 2) I would deem it “too cute” to wear. Now I think of the 80s neon era quite fondly for its audacity, and now that I’m older, looking “too cute” is kind of thing of the past. Neon pink has been on my lips since the day I decided to “think spring” and rebel against the scandalous March flurries. Finicky Canadian weather aside, I have two very bright, and very Canadian, lipsticks to rave about today.

Lippy Girl ‘Sassy Ass’ ($15.50 at eBeauty.ca)
I’ve been wearing this colour by Lippy Girl religiously since it arrived at my desk a couple of weeks ago. Its sheer hot pink shade makes it an easy transition into neonland. It’s very moisturizing and feels very balmy, but the more you layer, the brighter it gets. This is the first product by Lippy Girl I’ve featured. It’s a fairly new organic line from Whistler, BC and I look forward to trying more.

ILIA ‘Neon Angel’ ($24 at iliabeauty.com and these retailers)
New ILIA! Pardon the excitement, but I’ve been waiting for more products from ILIA since reviewing it last summer. The new lipstick line is rich, much different than the tinted lip conditioners, which were very sheer and delicate. Neon Angel is an intense, semi-matte formula with a shade that can be best described as electric. It’s only been with me for a couple of days, but I’m already calling it my shade of the summer.
Neon lips. Yes?