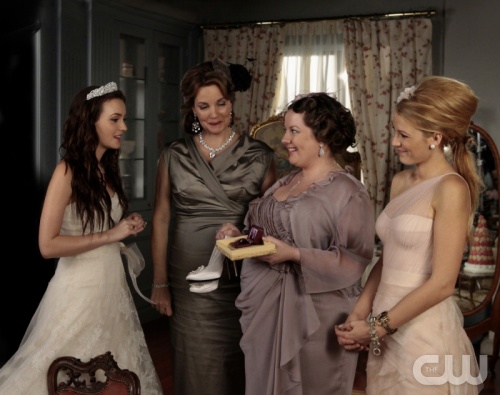 If you are a dork like me, then you’ll remember that the Gossip Girl pilot began with Peter Bjorn and John’s “Young Folks.” It brought back memories to the show we all once loved, the show that brought us catty teenage joy and a new found fondness for headbands. This week, Gossip Girl celebrated its 100th episode, and I really wish the celebration was a happy one. Sadly (and most of my commenters tend to agree) we have lost the show’s most enticing character, Blair Waldorf. Her sass and quick wit has been unrightfully wasted on this ridiculous royal storyline that engrossed a hefty chunk of the last two seasons. The writers left the real Blair behind at the top of the Empire State Building, where she might as well still be waiting for Chuck.
The reason I was so behind the Blair and Dan pairing is because it seemed as though that was the only time Blair’s true personality sparked in midst of the melodrama known as The Prince and The Bass. Thankfully, having read Carrie Raisler’s review of the episode on AV Club, I wasn’t the only “critic” that felt this way:
“This friendship, and the likeability it immediately brought to both characters, breathed a tremendous amount of life into what was a stale proceeding and showed just how unpredictable and rewarding serialized storytelling can be. “
The idea of a literary prodigy from Brooklyn, nicknamed somewhat affectionately by Gossip Girl as “Lonely Boy,” winning the heart and respect of an Upper East Side princess, or, in Gossip Girl terms our “Queen Bee,” was as appealing as the unconventional pairing of Seth Cohen and Summer Roberts. So, yes, very appealing. Whether it’s friendship or something more, it’s currently the best storyline Gossip Girl has, so the thought of the two opposites embarking on a Runaway Bride type scenario for the latter of season 5 (OMG I spent half a decade watching this show) sounds somewhat promising. 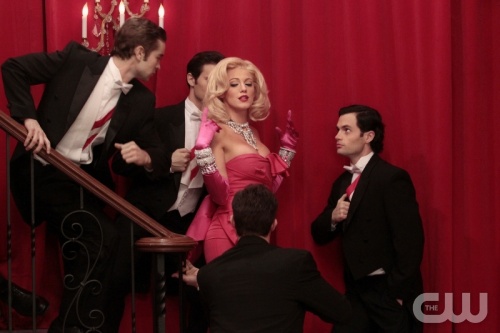 Lily’s reworked Charles Chang-Lima gown
Of course it helps that Serena is hung up on Lonely Boy, in what appears at the moment to be a one-sided affection. Not that it’s really hard to win Serena’s affections these days, but the thought of losing “the love of her life” to her best friend while at the same time being ditched by her best friend might be quite devastating. Blair could have easily called up Serena to make a run for it (Serena did offer), but she chose Dan. So much for my theory from a while back citing Serena as Blair’s “true love.” Despite Serena’s efforts to help by telling Chuck about Blair’s stupid superstition in an attempt to stop the wedding, she is no longer Blair’s partner in crime: her role has been reduced to minion status. 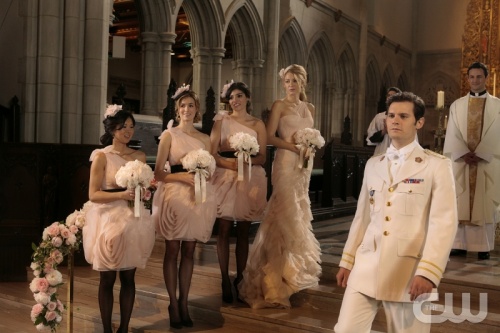 The grand minion AKA Serena: Vera Wang S/S 2011
Minions: Vera Wang for David’s Bridal
As it turns out, Blair did marry the Prince of Monaco in New York City (like this would ever be allowed, especially after the rumours of Charlene Wittstock’s passport being confiscated by the royals in fear of having a runaway bride), only to find out later that somewhere in between his arrival at the church and saying the vows, the Prince had a change of heart, leaving Blair in the life of a pretend princess.
What now? We shall see, but let’s hope the writers wrap this mess up by the next milestone (125).
PS. Forgot to talk about fashion (Vera Wang does pretty well), Nate (Wait — why is he still on this show?), and Georgina as the “new Gossip Girl” (What happened to the old one? Did she die or something?).
You know you love me.
xoxo,
It Girl