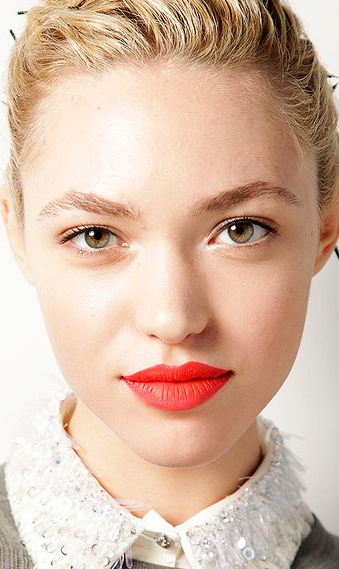 Jason Wu S/S 2012
I was going to save this look for actual spring, but since its star lipstick is selling fast, now is the time. Models at Jason Wu’s spring show sported the brightest acid-red lipstick, courtesy of MAC. This vivid orange-red is ‘Scarlet Ibis,’ from 90-year-old style icon Iris Apfel’s capsule collection. The colour was inspired by one of her favourite birds: the Scarlet Ibis, obviously.

MAC ‘Scarlet Ibis’ ($17.50 at MAC — sold out online, but still available in stores)
Okay, there was a little bit of “cheating” on makeup artist Diane Kendal’s part. She applied a dab of Pro Acid Orange Pigment on top to intensify it a little. But ‘Scarlet Ibis’ on its own is pretty damn close to what it looked like on the runway. Magnificent! No wonder it’s selling out like hotcakes.

NARS ‘Heat Wave’ ($30 at NARS)
If your local MAC counter is already out, no worries, NARS has a colour pretty similar to ‘Scarlet Ibis’. Try ‘Heat Wave’ for the same matte intensity, and a hint of orange.