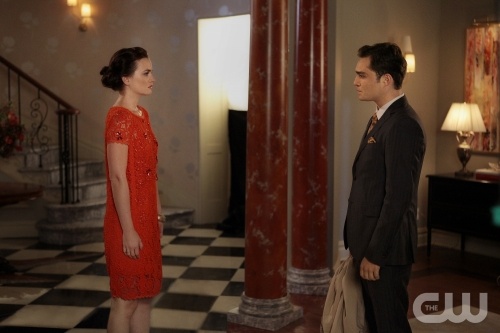 “As faithful minions through the years, you each get a chance to be immortalized as a bridesmaid in my royal wedding. But legally I must warn you not everyone will survive the tryouts. So… I’ve drafted a waiver for you to sign in case of a catastrophe,” explained Blair to some familiar old faces from when Gossip Girl was an amazing show. For a second, there was a tiny glimmer of hope that Nelly Yuki was going to make an appearance. But why should she? As a soon-to-be Yale graduate, she has the life Blair always wanted and Blair is, well, chasing a life only five-year-olds want: a Princess’ life. Princesses are boring, at least on screen. Like Mia Thermopolis in The Princess Diaries 2: Royal Engagement (yes, I’m a big fan of the first one). It’s only fun when it’s a fish out of water type of thing, and the show hasn’t really addressed that much. 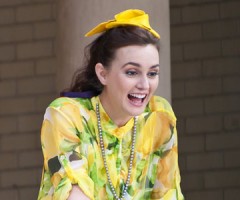 Moschino Cheap and Chic S/S 2011 blouse
Carlos Miele S/S 2011 skirt
Instead we have Blair still living in New York (even though her mother, father, and both step-fathers live in France, which is like right beside Monaco), not doing much at all. I’m not sure why, but the bridesmaid tryouts weren’t as enjoyable as they should have been. But Blair’s outfit was awesome so let’s focus on that. I always love Miss Blair in yellow. Yellow has brought us some of the show’s best style moments, as have Moschino’s fruit prints (remember Paris?). The little hat — sorry, fascinator — is adorable. 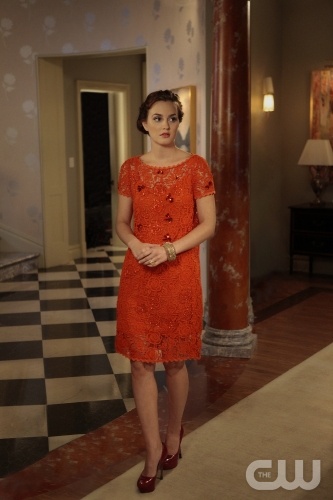 Blumarine F/W 2011 lace dress
Sergio Rossi pumps
Sequin cuff
From yellow we went to red, with one of my favourites this season: the little lace dress. She wears it to yet another party, this time for the launch of The Spectator (didn’t this launch already?) because for some reason, it’s fitting for a prince and a princess-in-waiting to attend a smutty magazine event. There, we find out that the baby is indeed The Prince’s. And we are lead to believe that, once again, Blair and Chuck are over for good. Cue “Video Games,” sad Chuck strolling by Harry Winston, leaving the ring behind. Go home to your adorable puppy; puppies make everything better.
Next week: sad Chuck is back to his perverted masked balls. Those always turn deliciously scandalous!
You know you love me,
xoxo,
It Girl


PS. Sorry guys, these things get shorter every week…