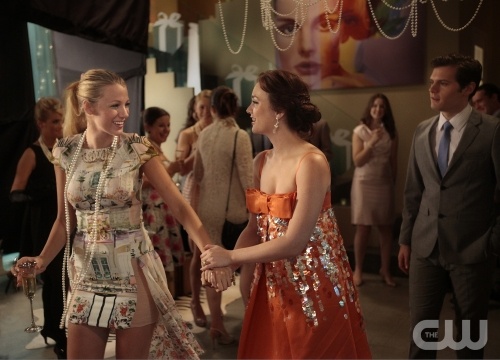 Okay, that was so good! The writers pulled it together for at least one episode and delivered something that almost echoed the magic of the Constance Billard days. Great dialogue, a slew of priceless, snarky one-liners, and, most importantly, magnificent clothes!
We finally saw Blair and Serena return to their old friendship, and we saw the beginning of a new one: Dan and Chuck’s. Although, oddly, they’ve always kind of had a mutual respect for each other… or enough intrigue on Dan’s end of things to write the Charlie Trout New Yorker story. The two of them together are magical: both young, brilliant, and disillusioned. I could use a whole episode of pot, room service, and The Matrix Trilogy — interestingly, it was also one of the most age-appropriate moments on the show yet. 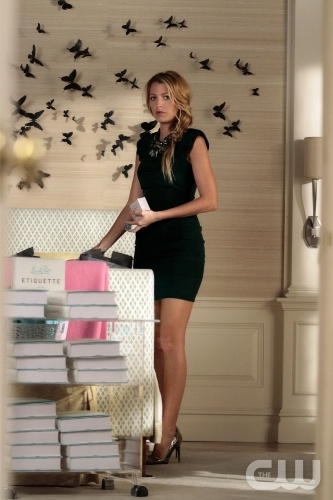 L’Agence dress
Sequin necklace
Dolce & Gabbana pumps
The girls’ storyline was just as magnificent, although definitely more PG rated. Serena might want to look into a “Professional Party Planner” career path, because the Tiffany’s-themed party she threw was amazing. Did you see all the goodies in the gift bags? Dior and Emily Post, so Blair. I also loved that she persuaded Blair’s minions to go along with the pretense of a blue collared affair. “Casual? Jeans? Evite?” Oh, the horror! 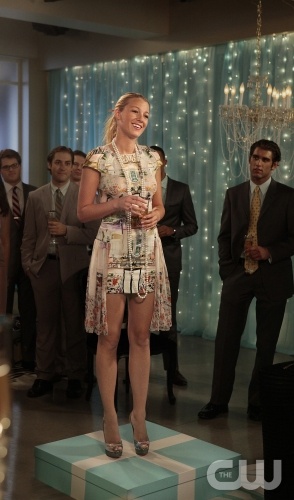 Mary Katrantzou’s S/S 2011 dress
Auden necklace
Roberto Coin and Lulu Frost rings
Christian Louboutin ‘Winter Trash’ pumps
Serena’s Mary Katrantzou dress was a dream. A beautiful rococo dream (I want my own Tiffany’s box to stand on). Of course, her amazing party was interrupted by The Spectator Gossip Girl source blast. Serena is surprised that she sent like “like 1,000 e-mails” to Gossip Girl. Doesn’t this automatically make her Spectator blog defunct? I mean the whole premise of it is based on the no-one-really-knows-who-I-am shtick. 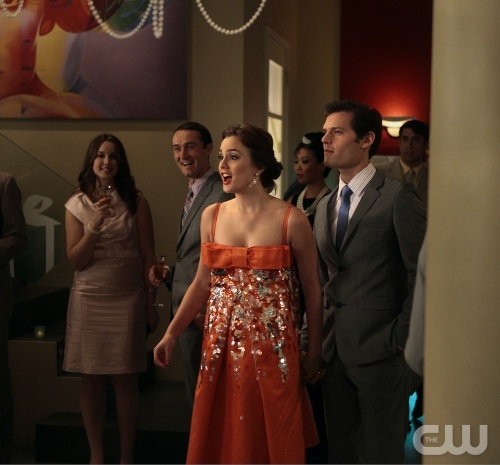 Christian Dior F/W 2008 dress
Tzen Earrings
Blair, on the other hand, sent twice as many. But that doesn’t surprise us. What is surprising, however, is The Prince’s efficient knowledge of blogging software (please!) and his decision to upload the scandalous information. The good thing, of course, is a window of opportunity for Chuck (or even Dan) to weasel his way into her good graces. Let’s wrap this Royal affair up, writers! As for the dress? So gorgeous. The bow! The embellishments! The colour! (And the very convenient concealment of the elusive “baby bump”– should she be showing by now? Ugh.)
What else? Oh, yes: Cousin Charlie. How does she keep getting away with this? I hear Grandma Cece is about to give family Rhodes a visit for the holidays. Does she even know what her granddaughter looks like? And speaking of grandchildren, why is grandpa Archibald so keen on “making over” Nate’s image? He’s like 20. And instead of being in college, he’s now editor-in-chief of a novelty gossip site masquerading as a magazine. What a wonderful career choice.
You know you love me.
xoxo,
It Girl