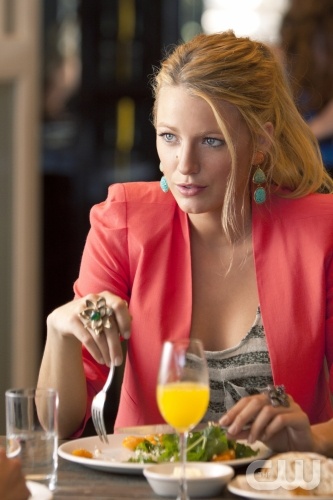 We’ve just been introduced to a hot priest. One that is having an affair with a princess. Clearly this show is ridiculous, but hey, let’s just go with the flow. But let’s start with Serena and her super-boring L.A. thing. I’m really finding it difficult to care about this storyline. It’s just going to be another dragged out case of a fake relative. We’ve done this many times before: Chuck’s mom, Rufus and Lily’s illegitimate child Scott…. It’s lame. 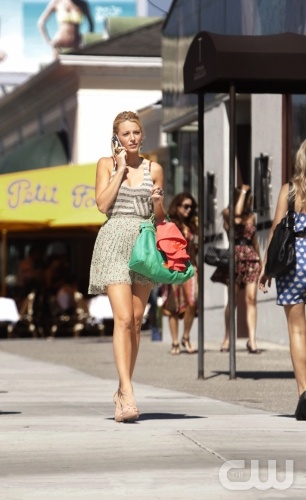 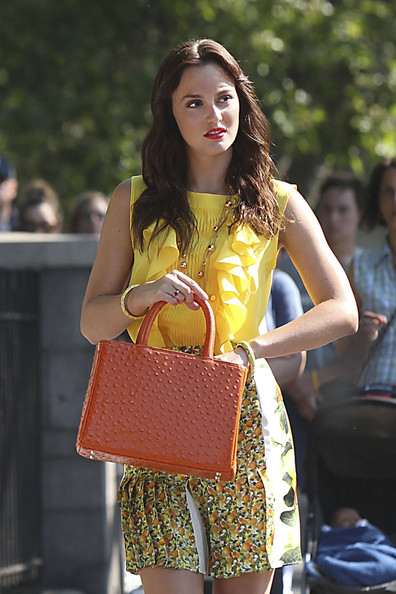 Peter Som blouse
Stella McCartney S/S 2011 skirt
Brian Atwood ‘Maniac’ orange pumps
Riki Rosetta ‘Bella’ tote
Blair’s clothes were also fun and colourful with the Stella McCartney fruit skirt (um, like fruit signifying her fertility, haha?). Later she changed into a gold brocade, Kate Middleton-like shift Prada dress and Bounkit earrings. While Blair as a character has always remained sartorially tight, let’s just say that it’s a little weird that, at the age of 21 (is she even 21?), she is already on the marriage and motherhood track (well, we know that at least one of these is not going to happen). Seems out of character for her. Actually, the only time she seems in character is with Dan.
Her moments with Dan make me very happy. Sorry guys, but I’m officially on Blair/Dan team. Is anyone dying to know what he wrote about her? How do we get a hold of Dan’s book? Did you see him smell her hair? Prince Louis is about to get his heart broken into million little pieces.
And The Princess and The Priest? Wow, dirrrrrty.
You know you love me (even though this episode was a bore),
xoxo,
It Girl
PS. Where in the world are Rufus and Lily?