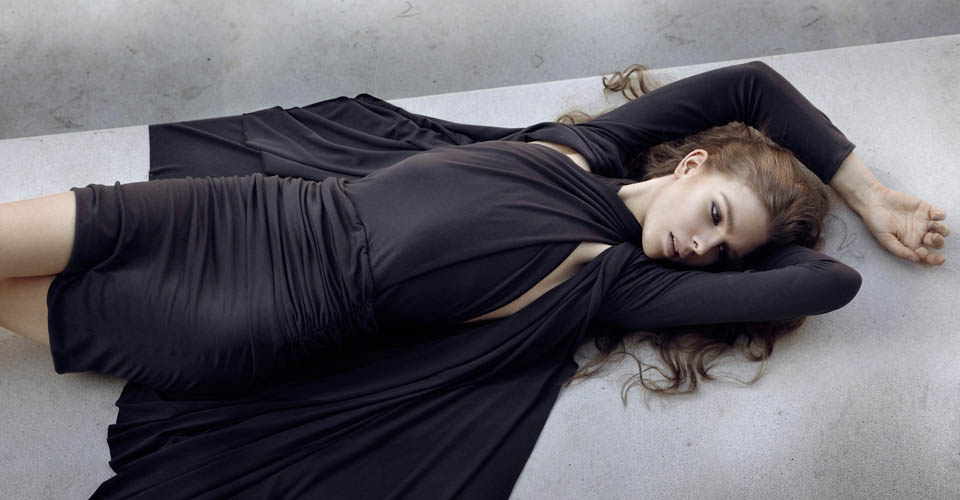 Jason Matlo F/W 2010
I met with Vancouver’s darling Jason Matlo at his tiny live/work studio space at the edge of Yaletown. The space was crazy organized, almost in an OCD kind of way, with a clear division where Jason Matlo the designer ends and Jason Matlo the person begins. A bed, couch with coffee table and a dining room table in one corner, all very sleek and modern. On the other side: patterns, sewing machines, clothing racks, all looking very busy and important.
The S/S 2011 collection is almost ready to go. Pieces in shades of cream and grey in soft linens, silks and jerseys — all impeccably tailored — waiting for their big debut. On the table, a styrofoam head form wearing a pair of glitter Mickey Mouse ears. It was Jason’s Halloween costume a couple of nights before. This is the charm of Jason Matlo. He is a bit of an enigma. On one hand, he is a serious and refined sophisticate, but on the other, a total comedian. He tells me that there were some fake glitter lips involved (would have loved to have seen that).
With three lines (Jason Matlo, Jason Matlo BABE and Bridal), Matlo is becoming a force to be reckoned with, a survivor in a tough game of Canadian design. He is frank, intelligent and extremely funny. 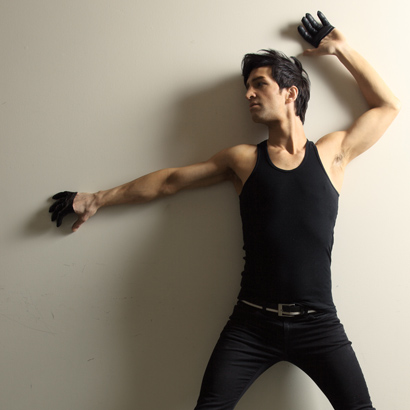 Jason Matlo
After some initial success, you decided to go back to school and seriously study fashion. Is fashion something you always wanted to do?
I basically started off in Fine Arts. What ended up happening is that images of fashion kept being incorporated into my fine arts world and all the profs at the time started to say “You should really consider going to fashion design school.” And I didn’t do it right away. There was a ten year gap between my fine arts program and going into fashion. I was always interested in fashion and it was something I always wanted to do but it needed to be the right time for me. I was almost 30 when I went back to school so the timing was perfect. It’s a double-edged sword because you want to do it when you’re young because it takes a long time. It takes ten years to build a fashion brand. I found when I was in school I took it really seriously because it’s kind of your last exit off of the highway to sort of get something going. I really dug in and took it seriously.

Do you incorporate your Fine Arts knowledge into your fashion design?

I used to sketch all of the collections in these really detailed croquis sketched and now, just because of the nature of the business, I never have any time to draw. Literally, in my book, I have sketches on Post-It notes. I sketch them down and when I sit down with my design team, we have conversations about direction and we just draw patterns and make them. I think I’m constantly using [it], I think my eye is trained technically in art but I rarely pick up a pencil and sketch. 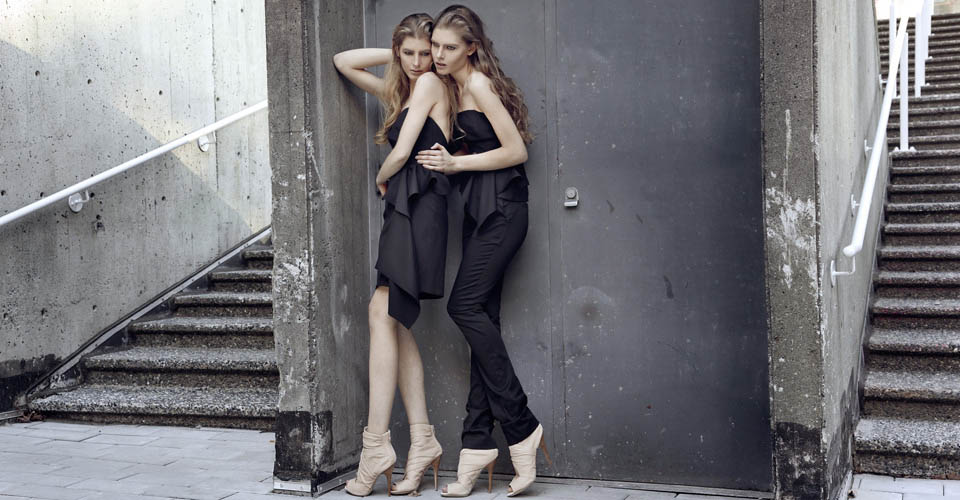 What was your first fashion memory?

Taking these little towelette things they used to have back in the 80s, now J-Cloth towels, and streaming them together under my mom’s sink, making little clothes and running around the back yard in them. Interestingly enough, when I started my business, not my line but my incorporated business, I wanted to call it J-Cloth. But it’s a registered trademark and I couldn’t have it.

Who is the Jason Matlo woman?

It’s interesting because now that we have many divisions with Bridal and Babe, we have a broader spectrum. For our ready-to-wear, it’s a 25-55 year old professional woman. She likes quality clothes, fit, beautiful finishing. She is confident, bold, not super fashion-directional (I wouldn’t say our clothes are super fashion directional) but stylish. She likes classic shapes. She is affluent because our clothes are at higher price point.

Do you have a muse or a style icon?

My mom, who is the CEO of my company. I remember growing up and she always loved fashion. I grew up in Chestemere Lake in Calgary so there were maybe five houses and she used to dress really glamorously. They owned a business in Calgary so they were entertaining clients a lot. I always remember her being in sequined gowns, very coiffed with beautiful make-up, nails and heels. I just assumed everyone’s mothers looked like the Charlie’s Angels. That’s where the glamorous clothes come from and she is very beautiful, even now in her 60s.

My clients are very inspiring to me. I have a group of society women in the city that I dress and they are incredibly stylish and I get tonnes of inspiration from them. 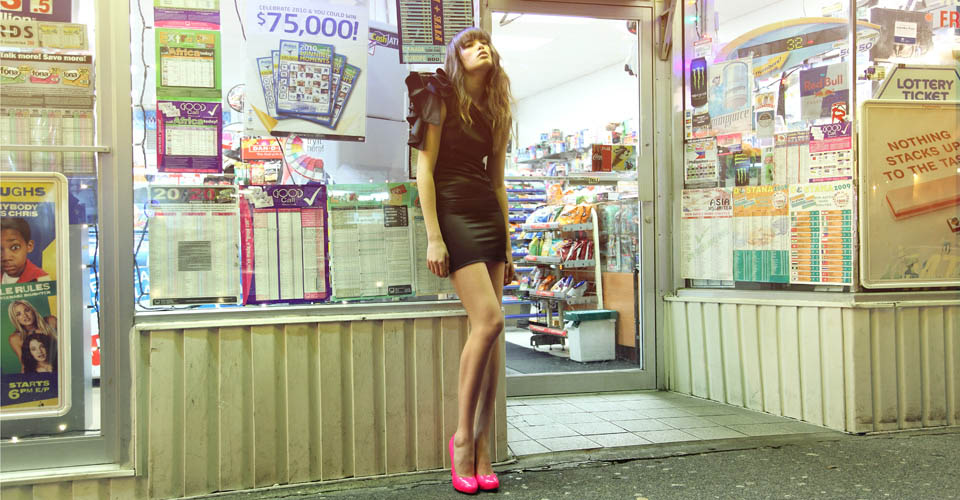 Jason Matlo BABE F/W 2010
Are there any women that you are just dying to dress?

I’ve always loved Cate Blanchett. I’m going to shoot myself in the foot with this, but I don’t really think in terms of dressing celebrities, although it’s great when you do, but I’m not really all that enamoured with the whole celebrity thing. I’m just as excited to dress my society women and deliver to my stores. I’m really excited when I go out down the street and see women on the street wearing my clothes. More than in the magazines because, for me, magazines and celebrities and the fashion industry is a little bit a world of make believe. But when you actually see real women in space and time wearing the clothes, to me, is really exciting. That they are incorporating that into their wardrobe and their lives: I find that incredibly exciting!

[To his assistant Wen-chee Liu] Who do we like? Julianne Moore. I like those kinds of women. I’m not screaming to dress Lindsay Lohan and Paris Hilton. I’d try to work around them not being able to buy the clothes. It would be brand damaging. I like the more sophisticated fashion women on Hollywood. 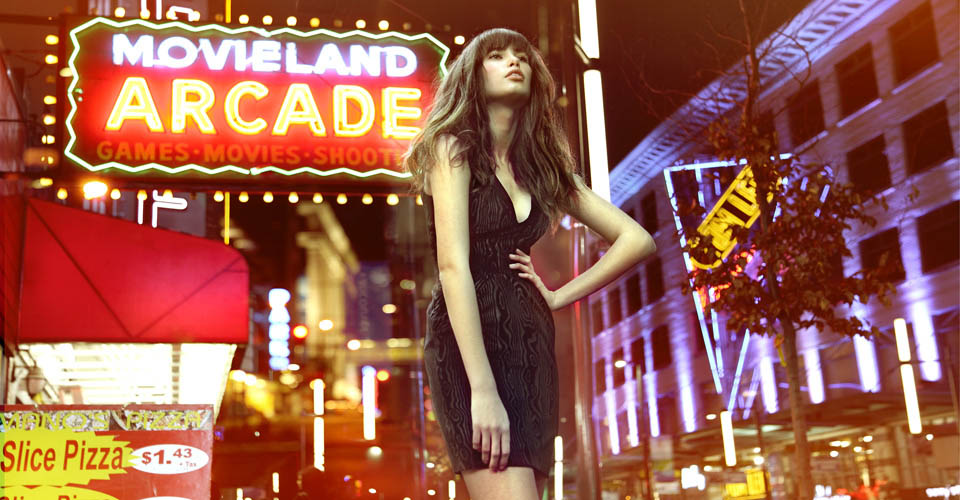 Jason Matlo BABE F/W 2010
You’ve had enough success that you could, potentially, pack-up your business and move it elsewhere. Why do you choose to stay in Vancouver?

I think what tends to happen in Vancouver. They are so many people from Vancouver that have done great things but nobody ever stays home and I feel like Vancouver is such a great base to be out of. I really don’t entertain the ideas of living anywhere else. I’ll travel more and I want to branch out internationally. I think it’s a double-edged sword again. It can be a nail in your coffin to be Canadian but I don’t think it’s held me back at all in terms of building my brand. When I started my company, everyone told me I was completely insane to try and do what I’m doing out of the wrong end of the country. I’ve seen big design houses from Montreal and Toronto but I’m still here. So I don’t think moving east is necessarily the answer.

What are your thoughts on Canadian fashion?

Do I want to be diplomatic? There is something distinctly Canadian about Canadian fashion that I’m not all that impressed with. I don’t know what it is that makes it look Canadian. We’ve been told that our clothes don’t look Canadian and I don’t know if it’s our point of view or how we design or how we finish things. I think there is this whole “nature-y” — and there is nothing wrong with this — Canadian looking thing to Canadian clothes. I want to look more like international runways than Canadian. Having said that, I think there are a lot of great Canadian designers. It’s got a really bad reputation and it’s a hard place to build a business because I feel, strongly, that Canadian retailers don’t support Canadian brands. It’s really hard to survive as a Canadian designer because it’s hard to get your clothes to the States and you have to throw yourself in front of the bus to make anyone in this country look at what you’re doing. It’s just recently that we have been accepted by the Canadian industry.

I feel really sorry for any designer that’s launching a line in Canada right now. We are in a recession. They are new. I don’t know how they’ll survive. I used to be really optimistic but I tell them that they got to be prepared to make no sales for a while. It’s a tough industry. Is it better than it was five years ago? Definitely. I think we are heading in the right direction. I think it’s the best time it’s ever been for Canadian fashion but it’s the worst economically. 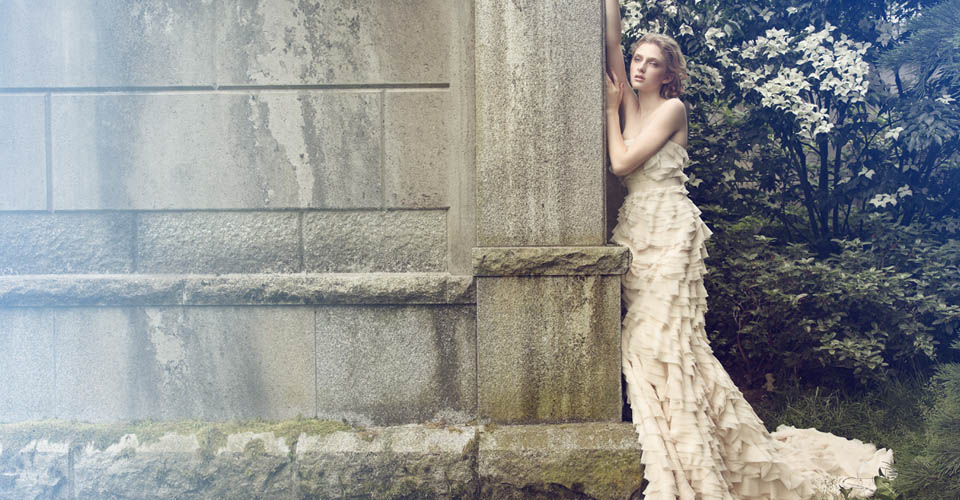 What are the top five most played songs on your iTunes?

We been listening to Semi Precious Weapons’ “Magnetic Baby,” “Get Me Bodied” by Beyonce intensively. Ah, “Hang with Me” by Robyn. Anything from the High School Musical soundtrack. We love musicals. I love Broadway musicals and, fortunately for me, so does everyone else on my staff. And local artist Peter Ries has this song “Angel” that we’ve been playing a lot.

I kind of have an obsession with High School Musical. People find it very funny. If people saw the mothership, they would actually be really surprised at what goes on in here! Haha, it is what it is. 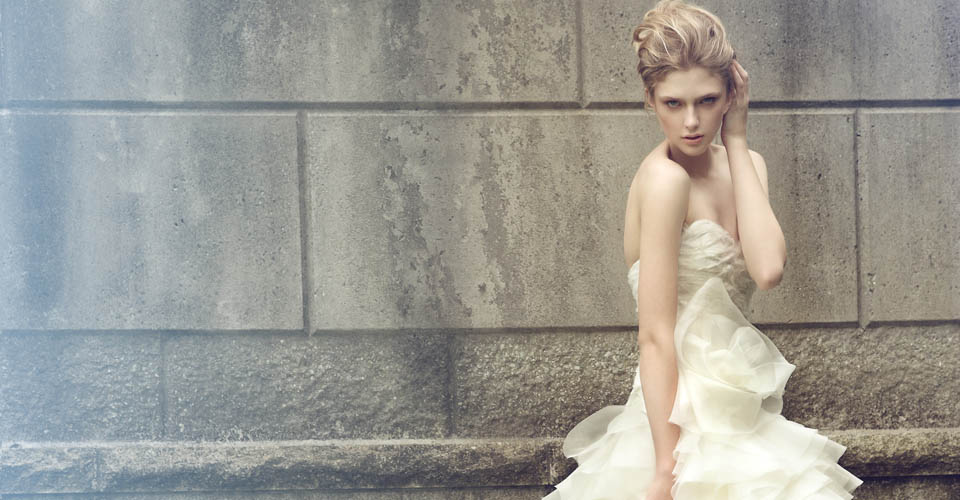 Probably “ironic.” Definitely “funny.” I’m a total joker. I am the consummate “workaholic.” If you could sum me up in one word that would be it. Everything in my life revolves around work.

Jason Matlo will be making a special appearance and presentation at Lola Home and Apparel’s grand opening at their new location on 510 Beatty Street, Vancouver on Wednesday, November 24th. For the complete list of stockists, visit jasonmatlo.com.

All images courtesy of jasonmatlo.com.