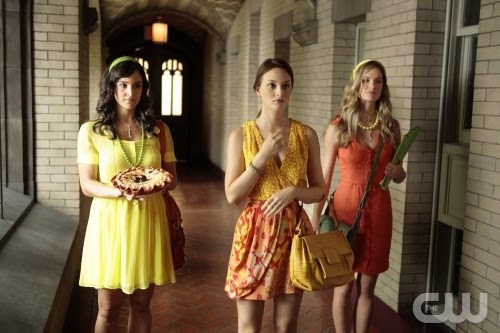 “I almost forgot how much I used to enjoy your pie.” – Chuck Bass

A great man once said that “all is fair in love and war.” And in a war between Chuck and Blair, my bets are on Chuck. With such existential notions as “a man with nothing to live for is capable of everything,” Chuck’s got nothing to lose and Blair has everything. She has already lost Chuck not only to Eva, but also to Little J. Methinks that while Chuck was once ashamed of popping Little J’s cherry, he now might proudly rub it in B’s face. And why not? As much as we don’t approve of Jenny’s baby prostitute garb, she is kind of hot shit… I think. We can fight about this, but I’ve kind of missed her. We all know how this will end eventually anyways, with Chuck and Blair in the back of a limo, where it all began.

Blair and her pie went down in style. I love the return of Constance Billard brightness: Blair and her minions in intense matching colours. (Although these new minions are nowhere as awesome as the evil Penelope and my favourite Nelly Yuki – bring back Nelly Yuki!). They seem, I have to say, too dumb to be at Columbia. 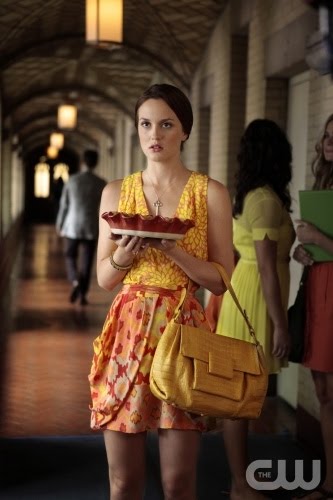 Nanette Lepore “Lady Gambler” dress
Nancy Gonzalez square-flap croc satchel
Mechante shoes
Tiffany & Co “Fleur de Lis” key pendant
Mathew Campbell bracelet
So aside from Chuck and Blair, this episode revolved around Miss Porny Eyebrows. Sigh. First of all: why is everyone taking her advice? Second: why has no one done a background check on this chick? Blair? Dorota? Chuck? Gossip Girl? Third: why would anyone trust her over Vanessa? That’s just absurd. Fourth: her clothes scream Nordstrom Rack! Shouldn’t that be enough to expose her as an Upper East Side outsider? Let’s ignore her.
Poor Vanessa gets screwed in this whole mess. That girl just can’t catch a break! Although, I have to say, she looked hot this episode (super hippie boho, but still hot) and sported some killer accessories. After four seasons, I’ve realized her favourite designer is Catherine Malandrino. How she affords it is a mystery, but it fits her so well. And it’s nice to see she finally discovered the magic of conditioner.

Is it just me or is there major chemistry between Vanessa and Rufus? What do we think about that? 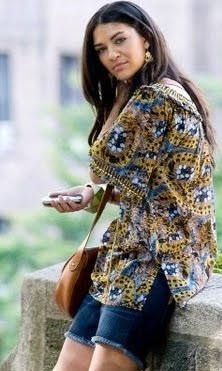 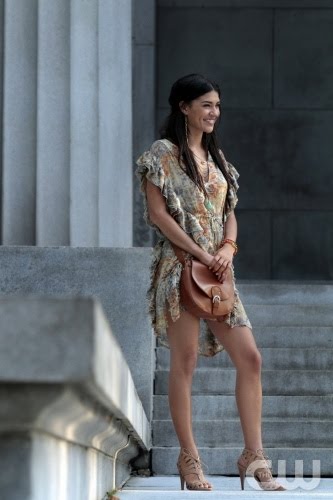 Catherine Malandrino dress
Radley London bag
Pour la Victoire “Jilliana” shoes
Stephen Dweck necklace
Bounkit bracelet (green one available at Sophie’s Closet)
And last but not least is “SVW has an STD.” That line cracked me up (and Gossip Girl witticisms barely do that these days). Serena sans STD meets a new love interest in form of Joan Hollaway’s hot-but-rapey husband (forgive me if you don’t watch Mad Men). It’s too early to tell what kind of romance this will be but I sincerely hope they don’t turn him into a psycho (are there no normal people living in Manhattan?). As for her outfits: classic Serena. No surprises here. 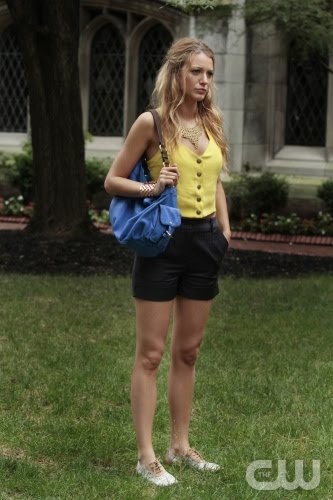 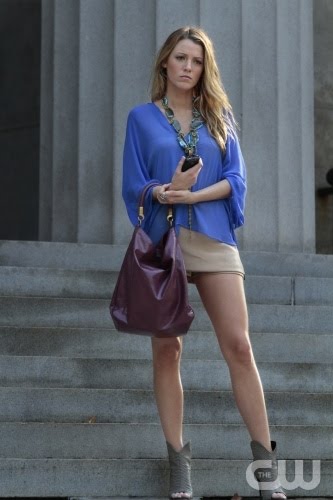 Gypsy 05 top
Wayne skirt
Susana Galvanis necklace
Yves Saint Laurent “Roady” bag
Giuseppe Zanotti peep-toe cowboy boots
Stephen Dweck ring
There is no Gossip Girl next week but the October 25th episode should be spectacular. Jenny returns in an episode titled Easy J (which reminds me: I saw Easy A over the weekend and I have to say that Dan Humphrey is a lot more likable when he’s not Dan Humphrey) and there are a gazillion cameos: Tim Gunn (who is no longer dean of Parsons but whatever… and did Chuck really call Veronica Webb?), Isaac Mizrahi and Ivanka Trump.