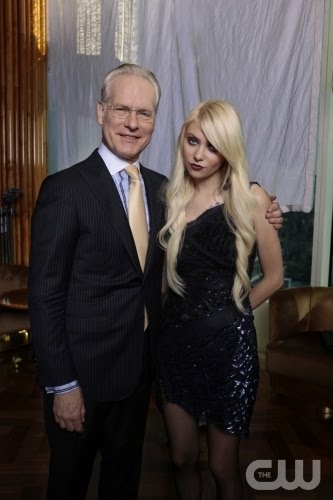 Before we start, I’m going to share some insights from Mr. Tim Gunn on Miss Taylor Momsen.

“What a diva! She was pathetic, she couldn’t remember her lines, and she didn’t even have that many. I thought to myself, ‘why are we all being held hostage by this brat?” (E! News)

Hahahahaha, dying!
Last week I said that I missed Little J. I take it back. Not because I don’t like her whiny character, but because she is just so damn hard to look at. That awful ringlet braided yellow hair, the panda eyes, the lipstick from the “Twilight” collection…Ugh. It hurts. The lace and sequins Pucci dress itself was quite nice but the styling was horrid. Serena would have worn that dress sans sheer tights, with her hair up and minimal makeup. What a waste. I hope Little J gets into Parsons: she’s got lots to learn. Somehow “whore” did seem appropriate. 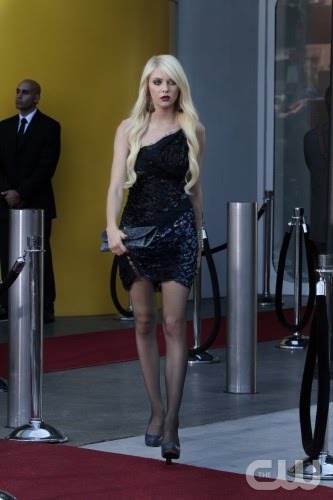 Pucci F/W 2010 dress
Low Luv x Erin Wasson cuff
Dolce Vita shoes
Carlos Fachi bag
Of course, Jenny did one good thing and sparked a little somethin’ somethin’ between Chuck and Blair. You could cut the sexual tension with a knife. As for Blair’s wardrobe, it was underwhelming yet again. The first one was cute (in fact, I was eyeing that Alice & Olivia skirt the other day) but nothing spectacular. The bland beige Victoria Beckham dress should have been worn by Miss Porny Eyebrows and not Blair. The best part of her wardrobe was her silk pajamas at the end of the episode (update: I found two close matches: one from Marni and the other from J Crew. I suppose one could always crop the pants into shorts). Amazingness. Can’t wait for Chuck to take them off. Make-up sex is the best. 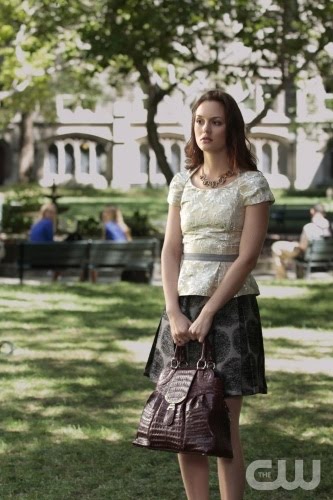 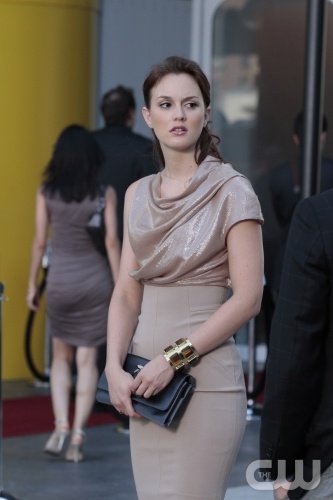 I loved Serena’s looks this episode. The styling of her first ensemble was sheer brilliance: two clashing golden prints accompanied by an embroidered knit Givenchy vest, perfectly put together (including Serena’s golden hair). 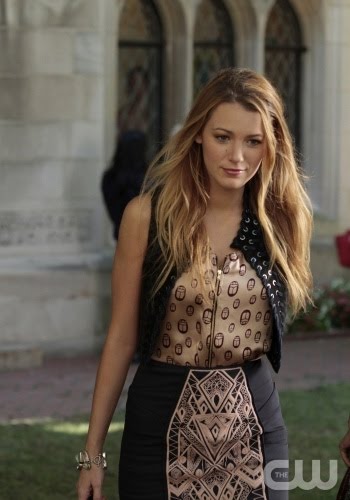 Porter Grey F/W 2010 top
Givenchy embroidered knit vest
Tibi Byzantine skirt
Stephen Dweck bracelet
Then there was the “boob” outfit. On anyone else this would have been a complete fail, but on Serena it just works. Maybe it’s her magical boobs but I don’t even mind the skinny pants with the silly ankle zippers undone. I know, I’m hypnotized. But I guess Mad Men’s Joan’s hot-but-rapey husband is not as hypnotized as we originally thought he was. He seems to be working with Miss Porny Eyebrows and the white-trashy Jail Guy. Again, why do all the new characters have to be evil? 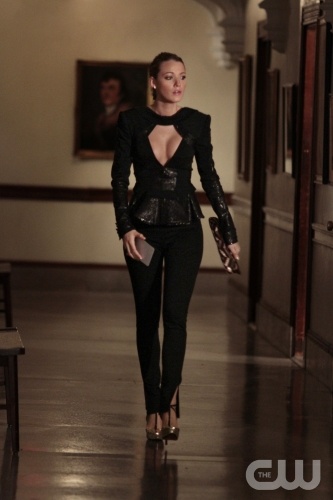 Maxime Simoens F/W 2010 jacket
Haute Hippie pants
Brian Atwood shoes
Kotur purse
Although she just learned the term “reverse psychology,” Lily looked as sophisticated as always. She wore a dress by this week’s other notable cameo, Isaac Mizrahi (side note: I used to be obsessed with Isaac Mizrahi. Remember Unzipped? It was the best. The flamboyance, the artistry, the drama, the Naomi… The best. I’m going to watch it tomorrow.) I’m going to also brag a little because I own Lily’s necklace. Did you see it glow in a certain light? 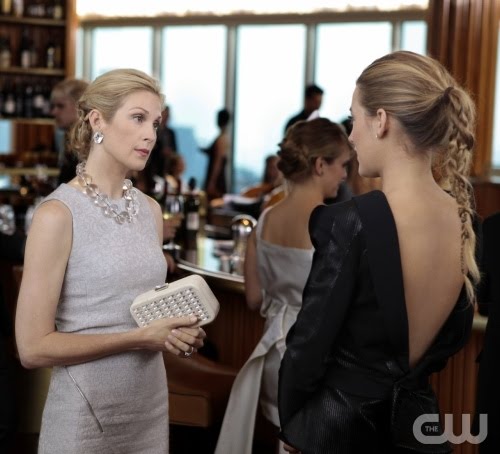 Isaac Mizrahi F/W 2010 dress
Devi Kroell large wooden clutch
Stephen Dweck bead necklace
I have a feeling this Porny Eyebrows/Jail Guy thing is going to go on forever. Yet they said goodbye to the adorable Clémence Poésy so soon…. It’s been awhile since we’ve seen Dorota and Vanya. What about the baby? I want to see the baby!

Until next week. You know you love me.

PS. Thanks to CW, InStyle and Gossip Girl Fashion for the tips.