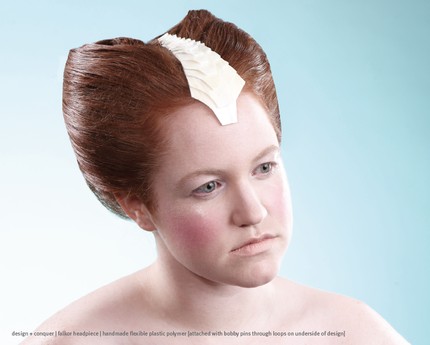 “Falkor” headpiece ($236.72 US on Etsy)
I discovered Design + Conquer after randomly clicking on a link posted by one of the 300 people I follow on Twitter. Being immediately drawn to its unique forms and materiality, I blogged about the label’s S/S 2010 collection a while back. Since then, Design + Conquer has been gathering a loyal following among fashion professionals, and has appeared in Fashion and Elle as well as gracing the runway at Toronto Fashion Week (with Jessica Biffi).
Founded by Vancouver-raised but Calgary-based (the latter city having been my previous home for about 10 years and often garnering a bad rep fashion-wise…undeservingly so, in my opinion) designer Morgan Mallett, who has a background in graphic design and painting, Design + Conquer is certainly set to, well, conquer the jewelry market, particularly for people that like to think and look outside of the norm. Her pieces, more often than not, resemble alien body parts more than jewelry, and her F/W 2010 collection blurs the perimeters between jewelry and wearable art.
All curious references to alien-like creatures and cyborgs are intentional: the main inspirations behind the collection were 80s sci-fi classics like TRON, the Neverending Story, and Star Wars. Additionally, the pieces are made entirely from fabricated plastic polymers, making them flexible and moldable to the body. Mallett has a meticulous eye for designing, art directing, and editing, making this F/W 2010 collection extremely focused and sophisticated, especially so considering she has only been doing it for two years: master control, if I may say (yes, a TRON reference). Who says geekery is uncool? 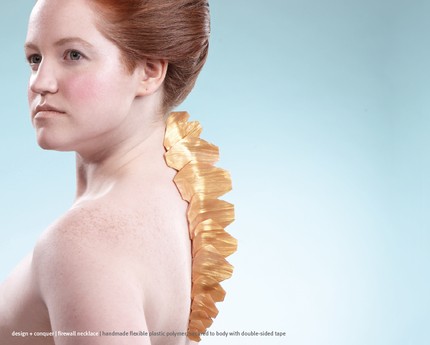 OK, let’s start with some geekery! What is your favourite sci-fi film of all-time? (I love ‘Blade Runner’).

I also love ‘Blade Runner! I don’t think my favourite sci-fi film of all-time has been made yet. I am, however, eagerly anticipating the new ‘TRON’ movie. Not for plot, but for the aesthetics and mood. I’d love to create designs for a movie, no genre restrictions.

What is it about the 80s sci-fi aesthetic that inspires you?

Perhaps there’s some nostalgia involved, as I was born in the 80s, but I think it’s mainly the mixture of low and high tech of that decade that attracts me. The 80s was when CG was just stretching its legs, and people were beginning to fully realize its applications. You pair that with traditional model-making, and you get a distinctive (and sometimes amusing!) aesthetic. It fascinates me how each generation crafts its own idea of what the future will be like, and in this process, reveals a lot about itself. For instance, you might see a movie that is visually futuristic, but the social roles of men and women may be antiquated.

Other than geeking out on sci-fi, do you also listen to music while you work? If so, what are you listening to at the moment?

Where do I start! I’m constantly discovering new music and pumping it in the studio. It gives me energy, and satisfies my audio cravings. Right now I’m listening to Telefon Tel Aviv (I got permission from the band to use one of their songs in my F/W 2010 video teaser, Caribou’s “Kaili,” and LCD Soundsystem’s “I Can Change.” I’m also listening to some 1920s flapper music (makes me feel like I’ve got a gramophone in the studio). I love music so much that I create iMixes for each collection, songs that inspired the designs. I just released my F/W 2010 iMix and YouTube playlists. 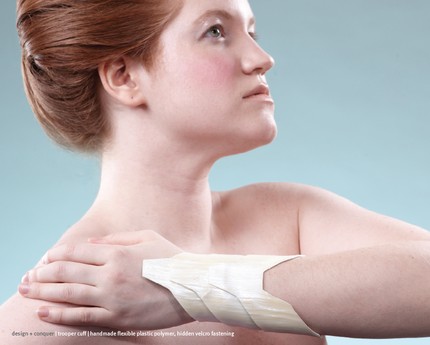 “Trooper” cuff ($275.57 US on Etsy)
You’ve studied painting and graphic design. Is Design + Conquer a good manifestation and progression of the concepts and skills learnt in your studies?

For sure. We were encouraged to experiment across mediums during my painting degree, and my graphic design background has taught me a lot about presentation and communication. Both degrees were invaluable experiences, but it’s my experience after graduation that has taught me the most. Formal education is important, but so is learning for yourself in an unstructured environment.

A road to one’s chosen career can be long and winding…. What did you want to be when you were little?

I wanted to be an artist! Always have. I wasn’t aware of all of the different forms and areas of art and design when I was little, but being creative has always been at my core. I was lucky to have a family who encouraged this (my Aunt Joey is an artist in Vancouver).

I think it pays to be different. What were some of the ideas behind the art direction of your lookbook?

‘Elizabethan stormtrooper’ was the original concept, but was refined along the way when the ‘TRON’ influence grew stronger. I wanted to reference history, and simultaneously create a futuristic look. I chose to photograph the pieces on the model, as this not only communicates the mood of the collection, but also the scale of the pieces, something I couldn’t achieve through product shots alone. I’m adamant about showing diversity in my work – size, age, etc. -and was thrilled to pair with Ben Barry Agency for my shoot. Ben’s agency vehemently promotes size, ethnicity and age diversity in fashion. As a child and teenager, I didn’t see much diversity in mass-media fashion. It’s truly fulfilling to have a voice in the fashion realm, and to express my values through my work.

I’ll be playing with translucency for my next collection…. 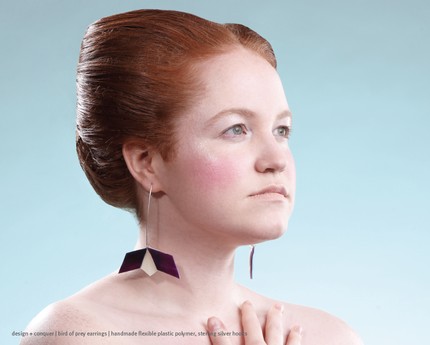 “Bird of Prey” earrings ($86.39 US on Etsy, 20 % proceeds go to the Humane Society for their BP oil spill cleanup efforts)

To learn more about Design + Conquer and for a complete list of stockists, visit www.designandconquerjewellery.com.