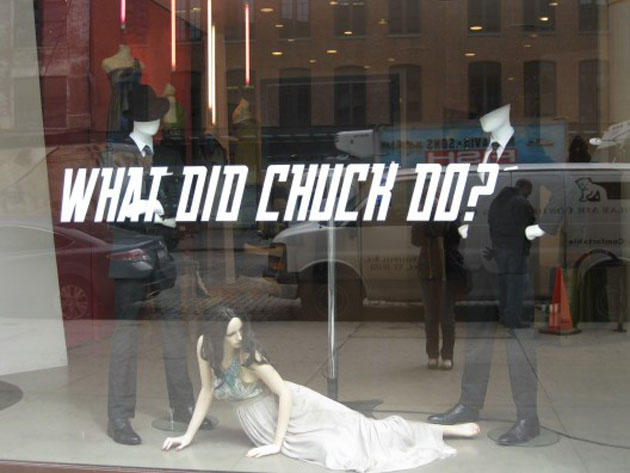 Matthew Williamson’s NYC store window
Chuck, you bastard! And with a little help of Matthew Williamson, gone is our favourite Gossip Girl couple. It is so over. On the bright side, at least something happened plot-wise.
Heartbreak makes for good TV, and there were so many broken and soon-to-be-broken hearts this week. Little J (I’m ignoring her until she wears colour or at least something different) is going into a full-fledged war with Serena (and possibly Eric) over Nate (not so smart, that one). V is sabotaging Dan for the Tisch writing program. Lily is spending some quality time with Mr. Van Der Woodsen. On the happy side, Dorota and Vanja are engaged and getting married next week (yay!), and my man Eric is back with an actual plot line (perhaps as a voice of reason to Little J) and a new love interest to keep things interesting.

Due to Nate’s “Assassin” game (what a stupid birthday party) everyone, except Blair, wore black. Serena looked great in her “Assassin” glory, so much so that Nate believed that she would actually wear a garter holster for her cell phone (like I said, not so smart that one). Black blazers are always a winning look for me. 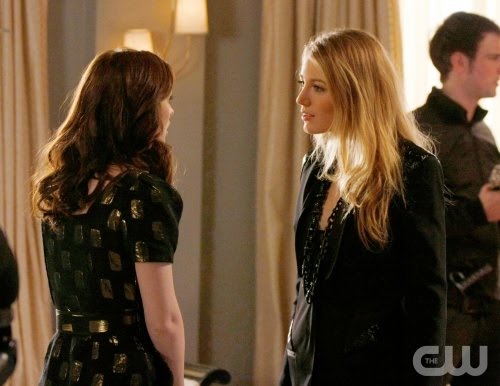 Matthew Williamson blazer
Lia Sophia necklace
Vanessa’s outfit just kills me! Amazing! She should wear stuff like that more often (minus the stupid beanie hat). I’m totally drooling over that Robert Rodriguez jumpsuit. I also like all the academic climbing Vanessa has been doing lately (remember her sabotaging Olivia over that parents’ dinner thing last year). She is like the Blair of academia. I hope she crushes Dan for Tisch because, well… he is just plain annoying. I mean, published in the New Yorker while still in high school? Bitch, please. 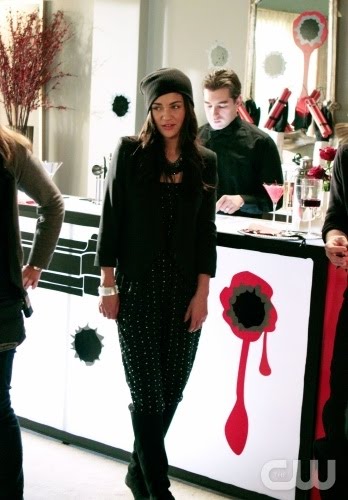 Helmut Lang blazer
Robert Rodriguez jumpsuit
Topshop hat
Sequin necklace
Alexis Bittar cuff
And so we are now done with the dumbest storyline since Chuck’s Eyes Wide Shut. The Indecent Proposal 2.0! The lost locket, the undead mom, the dirty uncle… it was all just to humiliate Chuck? Really? Jack didn’t actually want the Empire or Blair? Writers, please rent Dynasty and watch a real villain – Alexis Carrington – do her magic. You might actually learn something. But Blair did look amazing and losing-a-hotel-over worthy. Her Marc Jacobs dress was a little (not so) innocent girl about to cross the line into Brandice aka Valentino 360 territory. “Prostitutes are people too”: you said it Blair.

At least the big fall from grace took place while wearing a $3,500 ridiculously gorgeous Matthew Williamson. It could have been worse. She could have been wearing a Cavalli (you know that’s what dirty uncle Jack would have preferred). But, I’m confused: didn’t they already sleep together? I can’t keep track anymore.

Next week: Dorota gets married! Do I see Chuck as Vanja’s best man? Is that Blair as Dorota’s maid of honour? Should be interesting… 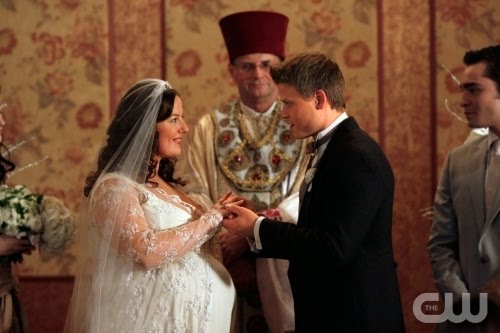 PS. Thanks to InStyle Magazine for the info.
PPS. How awesome is Matthew Williamson?