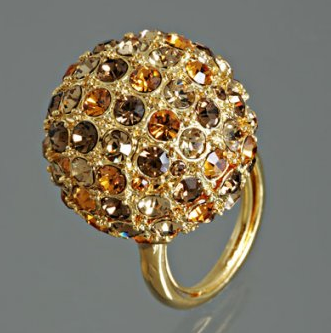 gold crystal studded disco ball ring
I have a thing for oversized cocktail rings. I received one of these lovelies as a gift this week (ka–ching!). Mine is purple and it’s even shinier on person!

Lately, I been really loving Kenneth Jay Lane. He began his career as a shoe designer for Christian Dior but quickly developed an interest in jewelry. In fact, his first jewelry collection was such a hit that Saks Fifth Avenue sold its entire inventory in one day! His jewels have adorned such style legends like Jackie O and Audrey Hepburn. There is a rumor that Duchess of Windsor was buried wearing a Kenneth Jay Lane jewelled belt. Sounds good to me.