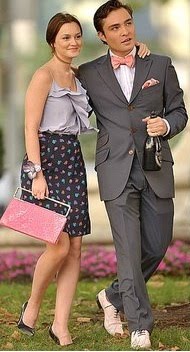 As the It Girl is pre-occupied with all things worldly, this week’s Gossip Girl fashion round-up falls to me, the It Guest. My apologies in advance, both for the tardiness and for, of course, the following.

This week found the gang pretty much doing the exact same thing they always do, which, since the season opener, is not a heck of a lot. What’s the show without some crazy cliffhanger mid-episode, with some mediocre resolution 3/4 of the way in, and another over-the-top cliffhanger at the end? Georgina might be up to something, but zzzzzzz I’m falling asleep just thinking about it.

Chuck and Blair yet again explored the confines of their domestic bliss only to discover what we all already knew: the two are boring if they aren’t scheming something up. In any case, the stylists seem intent on making sure their outfits match – the pink and lavender notes in their two outfits below doesn’t happen by accident (as if anything those two do happens by accident) – and Chuck had alot of awesome talking-like-Chuck-Bass moments that I’m trying to perfect for Halloween (my assumption is if I just peer at everything with my chin tucked into my chest and smile like the devil, I’m good). I can assume that the It Girl would fawn over the flower bracelet and ostrich clutch.

On Blair:
YAYA AFLALO garland ruffle top
Marc by Marc Jacobs ‘Pansy’ print skirt
Alex Woo spade pendant
Nancy Gonzalez ostrich clutch
Alexis Bittar flower cuff
There was some whatever plot about buying a photograph that tangentally was tied up into Georgina blah blah blah that really only ended up being awesome when Chuck told that God-complex assistant off (finally, some classic Chuck Bass!). Does no one else find it weird that a bunch of teenagers would show up to a Sotheby’s auction as a social event? Anyway, Blair had some sort of hologram effect type dress on, which I wasn’t feelin’, but who am I to complain? I ain’t no Chuck Bass (nor would I have cashed out my shares in Papa Corporate)(cause I like some sort of fiscal security)(because I am lame)(because I ain’t no Chuck Bass)(this stuff writes itself). 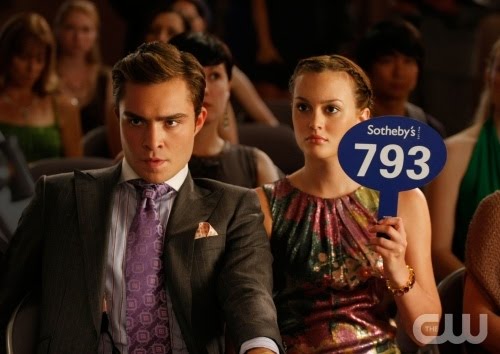 Elie Tahari ‘Gwen’ dress
I’m sure something must have happened with Serena this week. I seem to recall that this was the first episode in forever where she didn’t actually whine at lengths about something, though she fessed up to following her daddy issues all over Europe (with Almost Chuck in tow). I’m usually on the fence about her whole look – it’s like a young version of old Ellen Barkin – but this dress was as neutral as they come. I suppose this was Blair’s version of a stroll-in-the-park look: whatev, though the printed skirt and bag were nice. 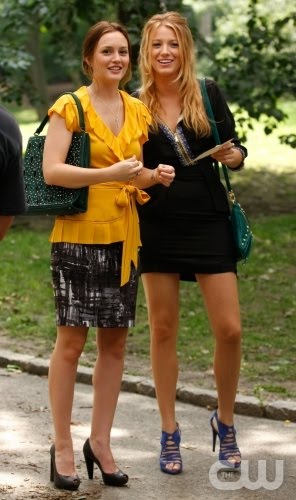 Here, I suppose, is Serena’s Chloe Sevigny look. The tank I can get with, and I’m assuming the Matthew Williamson vest is extraordinary, without being able to see the detailing up close. The It Girl is getting fond of Almost Chuck, but, in my opinion, he just ain’t got the flair. Perhaps he should perfect his talking-like-Chuck-Bass voice. He seems like he should perpetually be going off to Martha’s Vineyard or something for alone time, and the riches to rags storyline seems a little done. 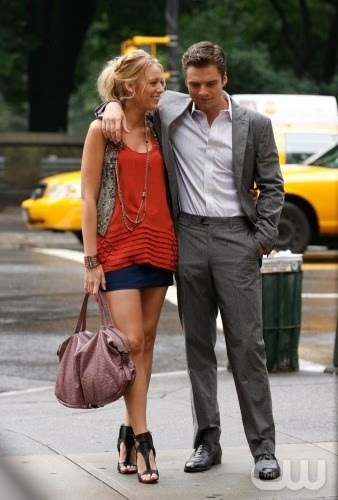 I really, absolutely cannot get with this dress though. Does Serena need to look even more like a cougar than she already does? Apparently the stylists say yes. I have been assured that this dress looks better up close, but I’d really prefer to see it from afar… really, really afar.

There was some Jenny appearances at some point (are we going to forget about her and the other Mean Girls?), some extraneous Dan stuff that makes me wonder why the New Yorker ever lets their name be mentioned (that gifted writer bullshit has really got to stop), and Vanessa discovered the mysterious truth behind that other should’ve been Humphrey kid that ended up being much ado about nothing. Because, apparently, nothing will happen plotwise until Serena’s mom comes back.